How to Make B2B Marketing Magic

Every single day, B2B professionals are working on the front lines of technological advancement to make the impossible a reality.

[For the next 10-15 minutes, the author of this post respectfully requests that you temporarily replace your perfectly natural skepticism and entirely justified sense of disbelief with the following facts.]

“Any sufficiently advanced technology is indistinguishable from magic.”

This is the third and perhaps most well-known of Clarke’s three laws. Full disclosure: Arthur C. Clarke was not a B2B marketer. He was a British science fiction writer.

When these words were first written in 1962, they were intended as a guideline for a genre still finding its literary and commercial value in the marketplace. Not a call to arms for B2B marketers. In fact, it’s unlikely that any B2B marketing professionals of the time took any notice whatsoever.

But a lot has changed over the past half century…

What would the original “Mad Men” make of posters printed with conductive ink, projection-mapped promotions that bring entire buildings to life or immersive 360-degree factory tours beamed directly into the audience’s eye? For a generation still transitioning into the cultural and psychological effects of color television, these technologies probably would have seemed like something out of a science fiction novel.

Of course, it’s easy to apply Clarke’s third law in hindsight. To speculate on how more “primitive” versions of ourselves and our society would wonder at the behaviors and technologies we take for granted today. It’s a bit more difficult to turn that lens forward toward the magic that’s about to happen…or that’s already happening all around us.

Those of us immersed in the day-to-day realities of B2B industries have a reputation for reducing the world to its more technical and tangible details. We tend to see things through the scientific lens of facts and schematics. That perspective doesn’t always leave room for magic.

But whether we acknowledge it or not, magic is real. And it doesn’t take a time traveler from the future to put it to work for your business and your customers.

First, you have to know what to look for. Which brings us to…

Fact # 2: There are exactly two kinds of magic in this world.

The first is slow but powerful. It’s patient and methodical. You might not even notice it at first. Or you might mistake it for something else entirely. Something that’s always been there. An assumption you’ve held for so long that questioning it now would shake the very foundations of your identity.

This particular magic feeds on belief. It uses constant repetition to ingrain its stories in each of our individual consciousnesses. Its collection and accumulation establishes and satisfies our expectations of the world, creating a communal experience. Building our collective reality brick by meticulous brick.

This type of magic keeps us from having to relearn ourselves and the world every single morning before breakfast: science, history, our own personal stories, etc. Yet, this magic draws its power from disrupting those same foundations and expectations.

With the wave of a wand, it can destabilize perceptions. But, after the applause, it offers us the opportunity to rebuild our viewpoints around new contexts and shifted priorities. When properly applied, this magic is the spark that grows into the flame that rewrites history. It can create new markets and, for better or worse, change human behavior forever.

It usually takes the guise of new technologies. Virtual, augmented, and mixed reality are a few of the latest examples. But, not so long ago, the iPhone changed modern communications and personal computing. Before that, social media brought a similar leap in online space. The internet, video, television, radio, the lightbulb, internal combustion, flight, movable type, gunpowder, steel, bronze, the wheel…the list goes on.

Each of these technologies have one thing in common: They did not evolve out of the devices, solutions and techniques that came before them. Instead, they solved seemingly impossible (or unknown) challenges by coming at them from entirely unexpected directions. As a result, they brought the kind of sweeping cultural change that redefined the world and set society on a new trajectory. They helped extend the boundaries of the possible.

Fact #3: B2B marketing is uniquely positioned to put both types of magic to work.

“The only way of discovering the limits of the possible is to venture a little way past them into the impossible.”

Magic #1 is great at setting boundaries and creating rules. These guidelines serve an important function. They help us organize and categorize the world according to an agreed upon set of parameters. They define the possible.

Magic #2 is all about breaking rules and disrupting expectations. It clears the way for the creation of new paradigms. It takes the possible as a starting point, a challenge, something to push past. It dwells in impossibilities.

At first glance, these two forces might seem oppositional. The first is slow, logical and methodical. The second is quick, emotional and volatile. Oil and water, right?

But what if both of these magics are actually two sides of the same coin?

What if the real magic happens in the moment where the impossible becomes possible? At that exact place where the boundary between reality and science fiction stretches and blurs?

That just so happens to be where B2B lives. 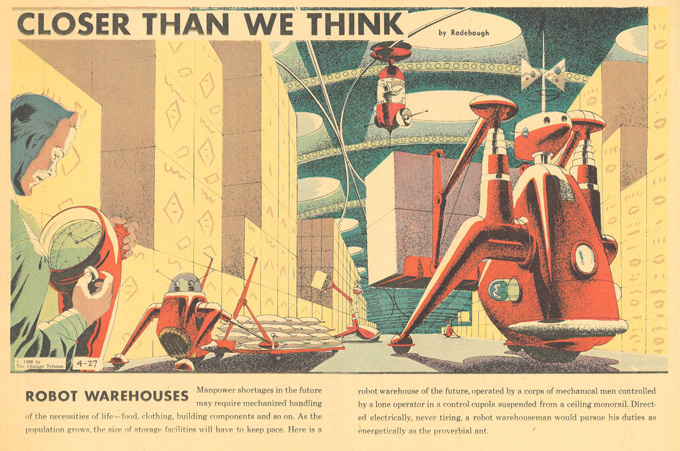 Every single day, countless engineers, researchers, product developers, technicians and other B2B professionals are working on the front lines of technological advancement to make the impossible a reality. They are constantly developing new designs, techniques and approaches that quietly advance the very infrastructure of our civilization.

And now, more than ever, B2B marketing is poised to harness and communicate that magic in new and engaging ways.

For far too long, the prevailing belief has been that B2B marketing is a left-brain exercise, driven by analytical forces. B2C, on the other hand, was seen as the wilder, emotion-driven, right-brain creative domain.

Today, we know better. Purchase decisions are not made in a single hemisphere of the brain. They are the result of emotional connections supported by logical proof. They happen when reality catches up with our imaginations.

Today’s B2B marketing is no longer limited to simply making a logical, realistic case for your products or services. Instead, it is igniting imaginations and putting the seemingly impossible within reach, making the present moment feel a little bit like science fiction.

This realization, combined with new technologies like AR, VR, conductive ink and others, has made B2B marketing magic a tangible and immediate reality.

You can choose to believe in it. Or not. But whatever decision you make, keep Clarke’s first law in mind: