Video: Mister Rogers Is the Patron Saint of B2B Marketers

There’s a lot that we B2B people can learn from one of history’s greatest communicators.

At the end of each episode, he would always sing “It’s Such a Good Feeling.” But sometimes it wasn’t. Not for us kids. Because our good friend was headed for the door, suddenly switching back into his business attire. The Keds and the cardigan were out of the picture. Heck, this wasn’t even business casual.

Mister Rogers was going to work.

At least we’d assumed as much. A couple decades later, we all went to work too. And now, while working all these hours that we used to spend in play, we find a question that our kid-selves had never once thought to ask: Where, exactly, was Mister Rogers going? If he was, in fact, going to work, what sort of work might he do? What kind of business would be a good fit for our favorite television neighbor?

We think he would’ve done well in B2B. As a matter of fact, we like to think of Mister Rogers as the most important role model for anyone who works in the B2B today.

What Is a Patron Saint?

So we’d like to informally call dibs on Mister Fred Rogers as the patron saint of B2B marketers.

One of the Greatest Modern Communicators

If you’re not familiar with Rogers, odds are you’ll know a lot more about him before the year is out. 2018 marks the 50th anniversary of Mister Rogers’ Neighborhood, and his groundbreaking work is being recognized with a tear-jerking documentary, an award-season biopic (starring Tom Hanks), a commemorative stamp and, of course, a Funko Pop vinyl figure.

All this recognition is a long time coming. From 1968 to 2001, while other public television shows aimed to teach children their ABCs and 1-2-3s, Fred Rogers designed a program that would teach emotional intelligence. With what looked like effortless grace, he showed kids how to deal with sickness, divorce and even death.

Along the way, Mister Rogers even saved the future of public television itself by melting the hearts of a jaded Senate panel. For real:

Mister Rogers was one of the 20th century’s greatest communicators, and every B2B marketer should make note of the techniques he used to captivate and comfort the world. We can think of five simple ways for you to start following his example, and we’re willing to bet you’ll endorse his canonization before you get to number 5. 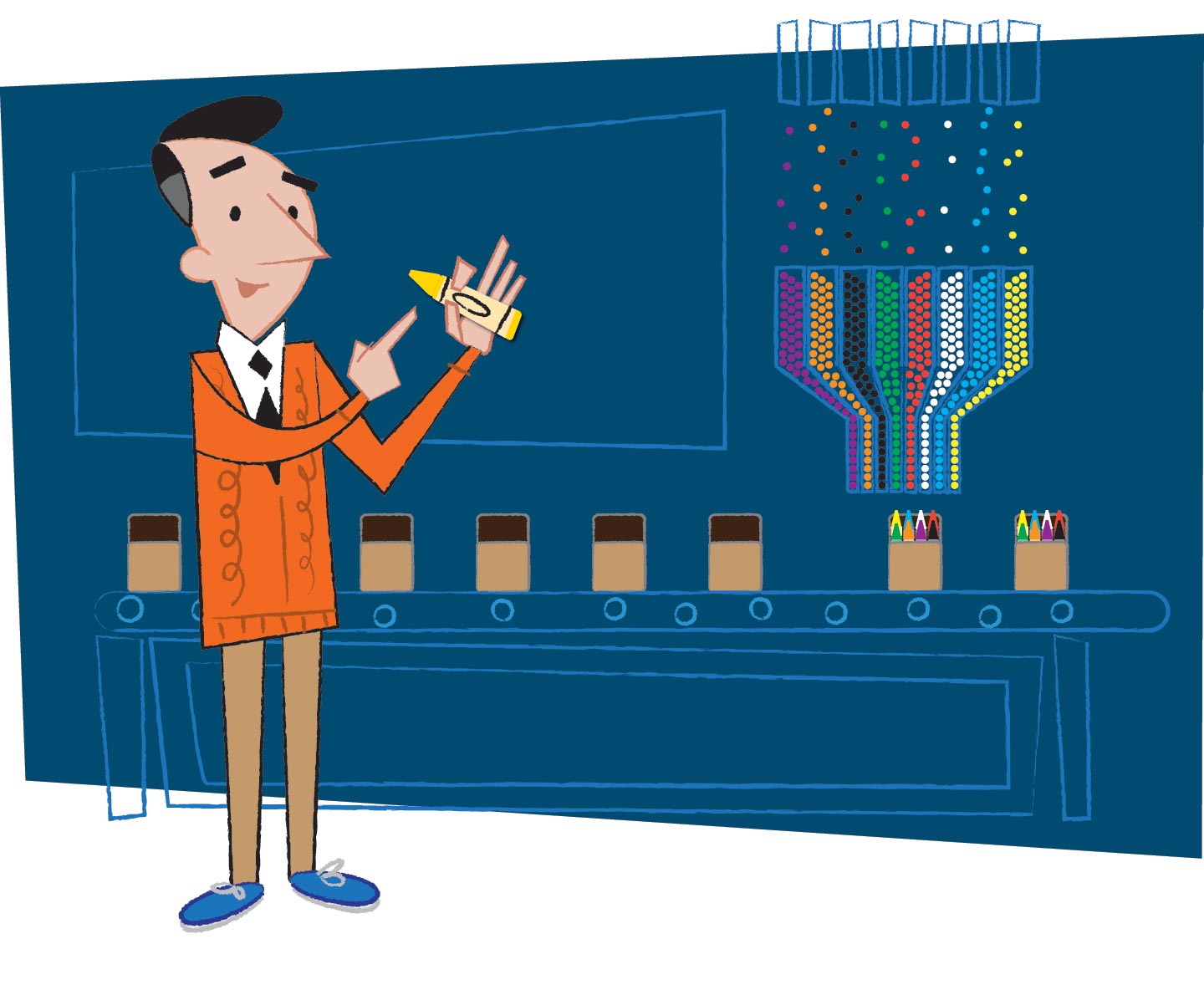 1. Keep your sense of wonder

The world of B2B is made up of many factories like this one. For some of us, such a factory is just downstairs or across the hall. Be sure to make the most of it: Pay a visit to your production floor neighbors and learn something new about the way things work. Make it a regular practice.

Our B2B companies make products that help the world work better. As you explore the intricacies of how that happens, you’ll find that an endless source of inspiration has been waiting quite literally around the corner.

2. Find the people behind the machine

In one 1989 episode, Mister Rogers toured a film processing plant and, near the end of his visit, he asked the plant manager a disarmingly simple question: “Did you like taking pictures when you were a boy?”

He always managed to throw in a question like this one. Even in a highly technical working environment, Mister Rogers never forgot that the whole enterprise existed for people. From the plant manager to the end user, human beings matter most.

“I like to get to know people—and not just the outside stuff of their lives. I like to try to understand the meaning of who people are and what they’re saying to me.” (Source: The World According to Mister Rogers)

This is how we start telling better stories in B2B. This is how we appreciate the brilliance of our product and its value to those who use it. We become better B2B professionals when we remember the humanity of our production workers, our engineers, our end users and, of course, our customers. 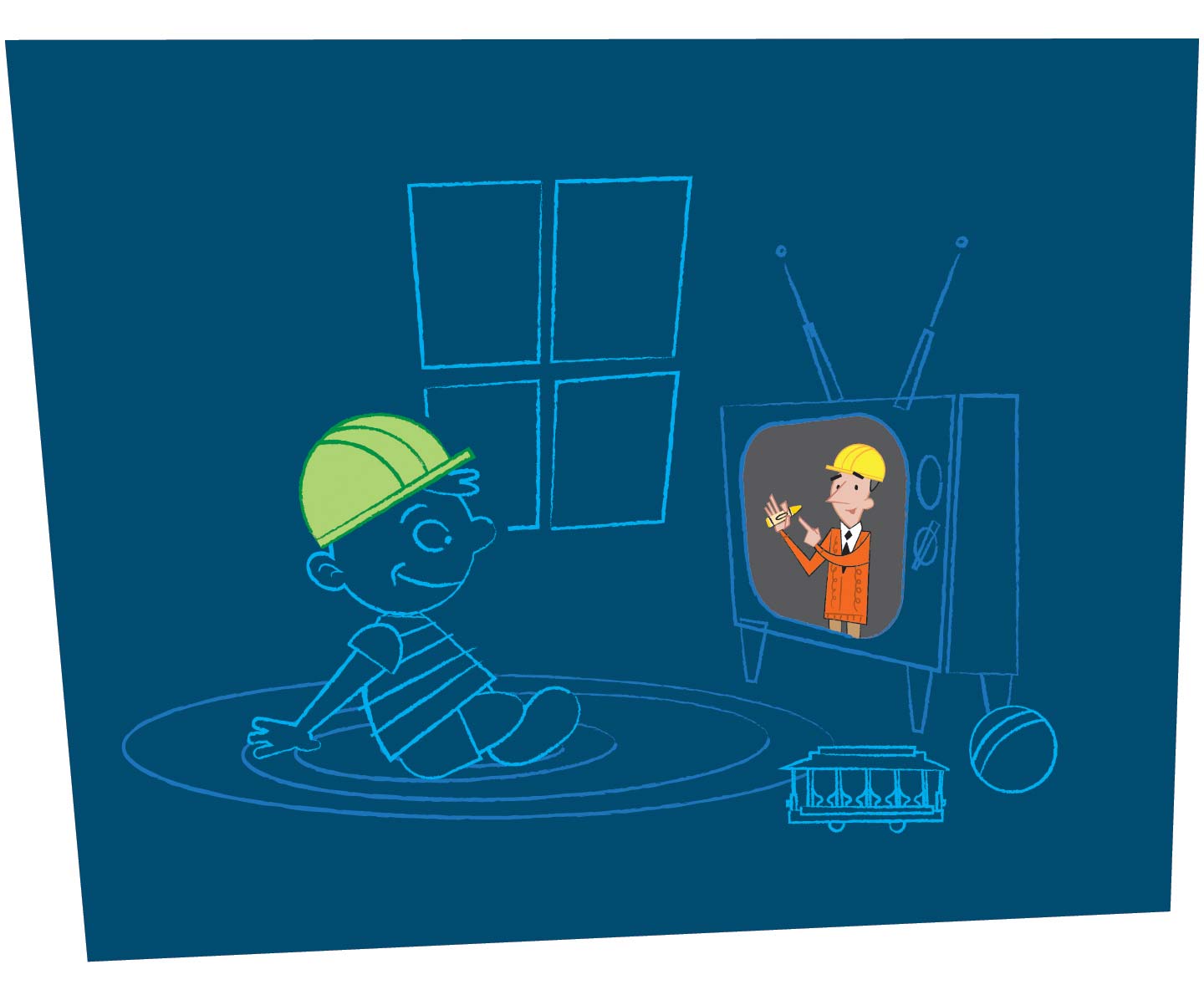 Mister Rogers received up to 4,000 letters from his fans each year. He replied to just about all of them, even when their questions were as complicated as the universe itself. Benjamin (age 4), for instance, wondered about “how the world started.” The child proceeded to unpack his personal theory involving exploded stars and circle shapes.

….Imagination isn’t just something children need for their pretending—it’s part of the work of grown people like scientists, too. Different people have different ideas about how the world started. I’m glad to know yours. It’s good that you are trying to figure it out for yourself. That’s a healthy way to keep growing all your life. (Source: Dear Mister Rogers, Does It Ever Rain in Your Neighborhood?)

Along with innumerable face-to-face interactions, these letters immersed Mister Rogers in the voice of his young audience. Especially during his factory tours, you can tell that he’s channeling that “voice of customer” through every question he poses along the way.

There’s more than one lesson here for B2B marketers, but one stands above the rest: Qualitative research matters. While market research and user data can teach us some valuable things about an audience, nothing beats listening. Spend time with the real voice of your real customers, and learn what’s really important to them.

If you think your product specs are tough to explain, try explaining death to a three-year-old. Mister Rogers made it look easy. His style of clear, simple communication was so dogmatically consistent that his staff writers documented those standards in a little style guide called “Let’s Talk About Freddish.” Here are three of its nine major rules:

For your audience of grown-up professionals, the rules might differ a bit. But this kind of purposeful simplicity lends power to communication in any forum. In a 2010 documentary, filmmaker Benjamin Wagner recalls Rogers once instructing him that “deep and simple is far more essential than shallow and complex.”

But let’s be real: By the looks of it, your B2B industry is extremely complex. For marketers, the temptation is to craft a message that matches this level of complexity. Resist the urge. As a B2B communicator, it’s your job is to ease people’s minds, not burden them even more. 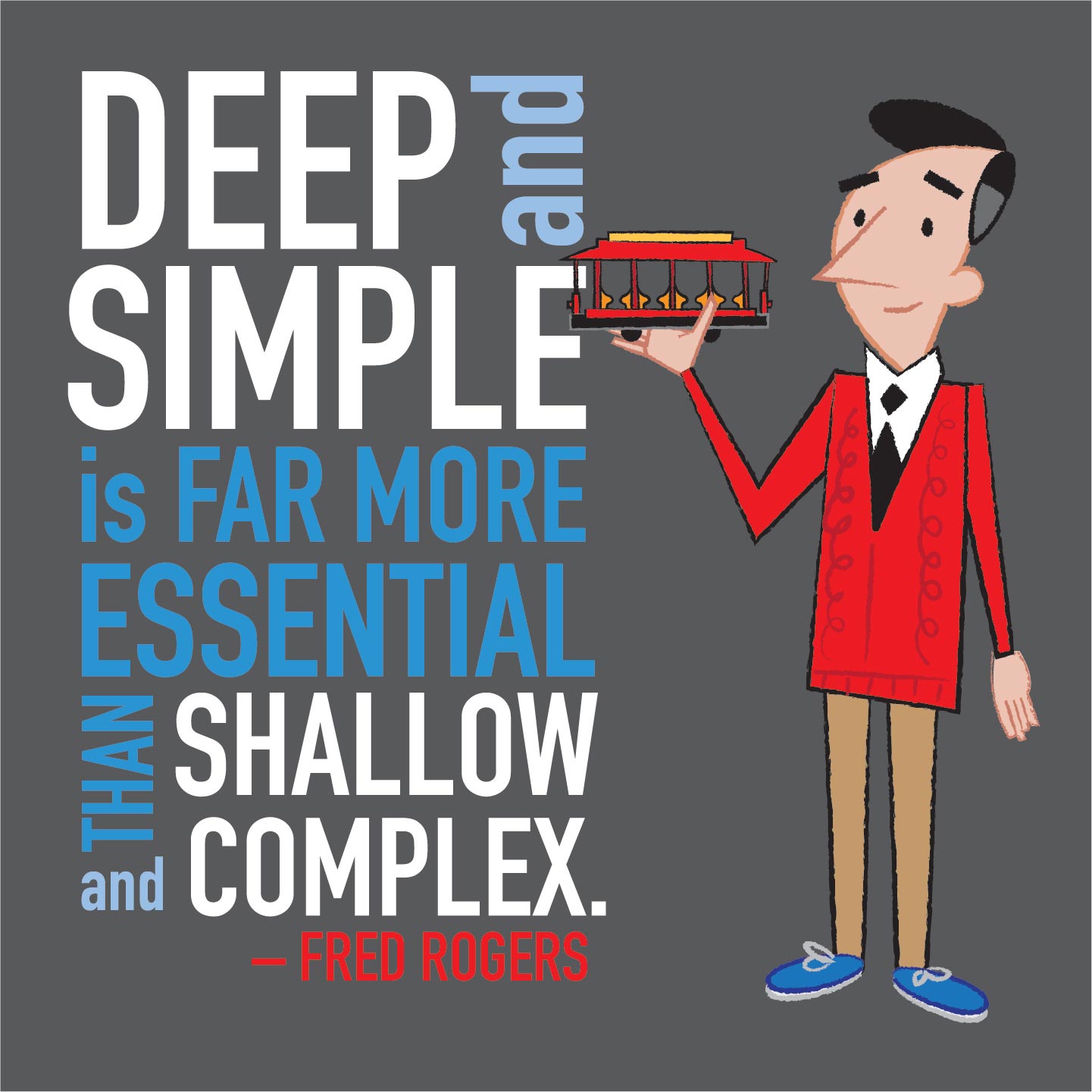 Refine your position, your message and your written content into the simplest possible terms. It might require “Freddish” levels of discipline to communicate a complex message with depth and simplicity, but you can be sure that your contribution will be far more essential.

5. Be your honest self

B2B people are lucky. We get to do the exciting work of marketing communications without losing our personal integrity. Think of it this way: We never have to convince an audience that the right kind of toothpaste will help them smile more. Our marketing stories are all about technology that makes the world work better—and how that technology can honestly make a customer more successful along the way.

So try asking yourself: How can I make the most of my honesty? How can I be more truthful with my customer? How can I be more candid with my coworker? How can I use transparency like a superpower? Take the advice of our patron saint and remember that “the greatest gift you ever give is your honest self.” (The World According to Mister Rogers) 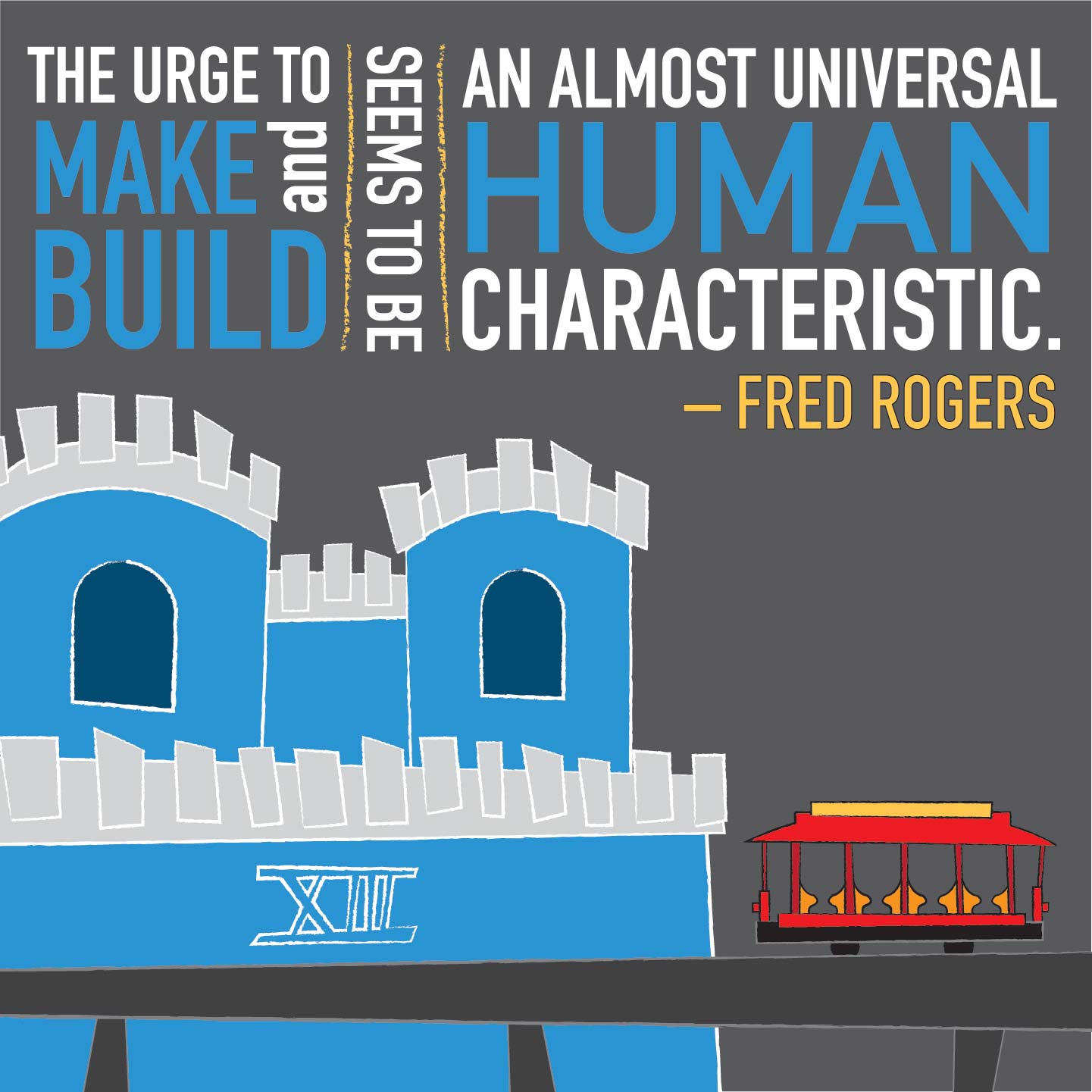 Something for You to Make Believe

B2B marketers are, by trade, the ambassadors of those who make and build the world around us. And Mister Rogers himself cared very deeply about helping people appreciate the work of such makers and builders:

“The urge to make and build seems to be an almost universal human characteristic. It goes way beyond meeting our need for survival and seems to be the expression of some deep-rooted part of being human. It isn’t surprising then that these acts of creation should be such a large part of children’s play.” (Source: The World According to Mister Rogers)

Mister Rogers got it. He understood exactly what it is that makes B2B people tick. That’s why we’ll always think of him as our very own patron saint.

As Mister Rogers put on that suit jacket and headed for the door, he sang a few words that neatly sum up the way people like us work together each day:

Another day, another idea, another opportunity for collaboration. It sure sounds a lot like B2B.

So whenever the day is new and we head for our own front doors, we like to make believe that we’re on our way to the same place Mister Rogers was going. Because we can all do better in the work of B2B if we live and work and play a bit more like he did.

And that is a very good feeling.